Up to the Challenge by Terri Osburn...another fabulous installment! 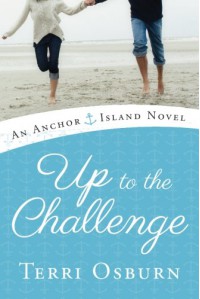 It's officially official...I stumbled across a favorite author purely by accident. This is my second Terri Osburn novel. Her debut, Meant to Be, blew me away. After reading this second installment in the Anchor Island series, my mind is made up. I'm in love with Terri Osburn. She writes what I want to read.

Anchor Island, (actually Ocracoke Island), which is the place Terri acknowledges as her inspiration:

Sid is a boat mechanic on Anchor Island. She's not an island lifer, but loves it like she's been here forever. She's tough, somewhat abrasive, and quite the tomboy. And she's been in love with Lucas Dempsey since high school.

Lucas Dempsey is a big shot lawyer over on the mainland. He grew up on Anchor Island but his goal was always to leave. Recovering from the humiliation of his fiancee leaving him for his brother isn't all that easy, even if he knows that they are perfect together. He knows Sid only as the tough mechanic chick in the baggy greasy clothes.

Now Lucas has come home. His father is in bad health and no matter Lucas' faults, he loves his family. So while his dad recovers from his ordeal, Lucas takes some much needed time away from the law firm to help out at the Dempsey family bar. Sid is there to help as well, and the forced time together begins to bring out the woman in Sid...and certainly makes Lucas see her in a different light!

Sid's friends see the attraction, and gives Sid the push for a little visual encouragement geared toward the clueless Lucas.

What I found great about Sid's little mini-transformation is how everyone on the island has always seen how gorgeous she is and yet never acted like it. But once Sid starts to put herself out there, the attention she gets is awesome...both for her self esteem...because she really was clueless...and for bringing out Lucas' possessive side. Nothing makes a man want you more than another man poaching!

So there is a major push and pull between these two extremely strong willed people. Which makes for SUCH a fun read. Their banter is hilarious.

"You might be the first woman I've ever met with a Napoleon complex."

"A little old for this rebel teen act, don't you think?"

If you're wondering about the sexy times, wonder no more! In Terri's first novel, the grande finale was a long time coming, but that was not the case with Sid and Lucas.

"...before she could respond, he took her mouth in a way he never had before. This wasn't just a kiss but a claiming."

Sid isn't cut out for life as a lawyer's wife.

"Sid just didn't fit the mold. Partner's wife. Smiling hostess. Pleasant and diplomatic. Strolling into the office for a lunch date wearing a shirt that read "Life's a bitch and then you marry one." would not go over well."

And Lucas has his dream job across the pond. They are SO VERY DIFFERENT. But they say opposites attract, and Osburn knocks it out of the park again with this second installment to her Anchor Island series. Not only does she give us a beautiful, sweet romance between a frumpy, greasy tomboy and a stuffed shirt, uptight lawyer, but she gives us more insight to the rest of the island and the people who call it home. I truly feel like each time I've picked up one of this author's books, I'm coming home to a place I've never been, as if these places and people are just waiting for me to arrive. I'm already anxiously awaiting the next installment.