American historical romance -A Woman of Choice by Kris Tualla 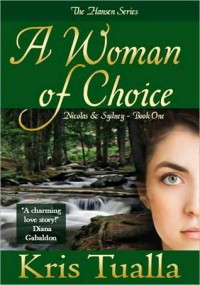 "She was doomed. Nicolas resided in her heart. He didn't wish to be there, and she hadn't invited him in. But there he was."

3.5 stars
MY SYNOPSIS
On the banks of a river, Nicolas Hansen and his best friend and brother in law stumble upon what looks to be a woman's body. On closer inspection, they find the woman is barely alive, and so Nicolas carries her home to be taken care of. When the woman awakens, she has no memory of who she is or how she came to be half drowned in the river. After realizing that her memory is not forthcoming, they decide to call her Sydney. And even while reaching for what used to be, Sydney embraces her new life and her new name.

Nicolas is a good man, a widower carving out a life for himself and his son in Missouri Territory. He's fairly wealthy by his neighbor's standards, but the area that he lacks wealth is the area of love and tenderness. Since the death of his wife and newborn son, he has lost his ability to feel, to be passionate, to laugh and love. Even his five year old son Stephan feels the loss. Nicolas' best friend Rick (his dead wife's brother) owns the land abutting his own.

Sydney feels a strong attraction toward her host. At first, she's simply grateful that he is goodhearted enough to take care of a homeless woman dumped into his lap. But when this huge Norse man begins to show his gentle side and the sexual awareness starts to creep in, neither Sydney nor Nick are loners enough to resist each other.

The problem lies, of course, in circumstances beyond their control...and some of their own problems that are out of control. Rick the best friend seems to have set his bachelor cap for Nicolas, while his sister seems to have her claws embedded into Nick. Sydney's past resurfaces with a vengeance...betrayal and heartbreak return to her, and let me tell you...it's a doozie when she remembers.

Last but certainly not least is Nicolas himself. The death of his wife was a blow from which he's never even attempted to recover from. He takes the blame on his shoulders, he questions his faith, and he vows to never love again. In his mind, it's not possible, nor is it worth it.

"With a clarity whose origin she could not fathom, she suddenly understood her host. He was the locked room upstairs. Profound pain preserved behind an impenetrable barricade. Don't let anyone in. Don't let the memories out."

MY THOUGHTS
There was so much about this story that I loved. The setting...early 1800's in Missouri Territory. Really, you just don't get early American historical romance without cowboys. And I loved that this author went there. It's fascinating to me how much history my country has in it's relatively short lifetime. I'm a Midwestern girl, so my roots are right near Missouri. The way this author injects the beauty of the wilderness into her visuals is wonderful. I'd swear I was back home walking by the creek, breathing in the scent of nature. It makes me wish for simpler times.

Okay...back to the book. These characters and this plot don't follow the typical romance sequence. They are all somewhat unexpected. The biggest thing that I noticed was the hero...he is not exactly always heroic when it comes to decision making. He's not a neglectful father, but he also is not all that loving and tender. He's not a very chivalrous man, either. Oh, at first, he seems that way...rescuing the damsel in distress and all. But his treatment of Sydney later in the book sure had THIS reader raising her eyebrows.

"He never stopped thinking about her. He sat up and tried to recall a day, even an hour, when she wasn't in his mind. He couldn't do it. He carried her with him all the time."

The love triangle aspect...hmmm. I think the blurb is misleading. The love triangle was missing half a limb for the most part. I never got the impression that there was actually any indecision on Sydney's part...it was more of a wait and see if our "hero" can come to his senses before he ruins everything type of feeling.

I think there was a LOT going on, and it tended to drag the story out a little too much. The thing is, I can't think of what could have been left out of the book and still left the integrity of the story intact, so that's a hard point to make. But I will say that I grew a little bored a couple of times.

However...this book has one of the BEST moments, the most PASSIONATE AND CLEAR quotes...I swear I stopped breathing. It's beautiful in it's simplicity.

"And then, without forethought or warning, she loved him."


Oh, the moment I live for reading...the whole reason I love this genre. My heart swelled, my eyes teared, and I believed in these two...in their love, in their destiny to be together. THIS MOMENT. Perfect.

The ending...NO WORDS! It takes what you think you know about where the next book is going...an throws it out the door, stomps it into the mud, and runs over it with the car. Literally...the last sentence blew my mind.

If you're looking for unconventional, this is a goodie. Some of the wording is extremely blunt...almost awkward. Bodily functions weren't written in vague terms or alluded to, even between characters.


The steam level is medium, maybe on the light side for my tastes but still nice and tasteful. The emotions are definitely there...I teared up a couple of times.

Huge thanks to JoAnn for the recommendation and the lend!